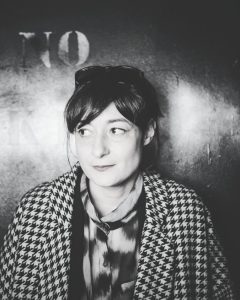 Ilaria Di Carlo is an Italian filmmaker and a visual artist living and working in Berlin since 2009. She graduated with honours in Scenography from the Fine Arts Academy in Rome and holds a Master’s Degree from Central Saint Martin’s College of Art in London. She subsequently studied filmmaking at the SAE Institute of Berlin.

Her visually driven experimental films explore the role of myth and classical literature as reflections on contemporary life, while focusing on the themes of journey and identity in relation to spaces, landscapes, and architecture. Site-specific quality of her work as a film director is complemented with her skills in set design and work in the art department for major film productions.

She has worked extensively as director, actress and scenographer for theatre and performance before she started directing her own films. Her filmography includes short films The Black Book of L, The Divine Way, which received 37 awards including the Barbara Aronofsky Latham Award for an Emerging Experimental Video Artist at the Ann Arbor Film Festival and Sirens, currently in post-production. Her films were screened in more than 50 countries, in over 170 international film festivals such as Cork Film Festival, Odense Film Festival, Oberhausen Kurzfilmtage and Filmfest Dresden amongst others.